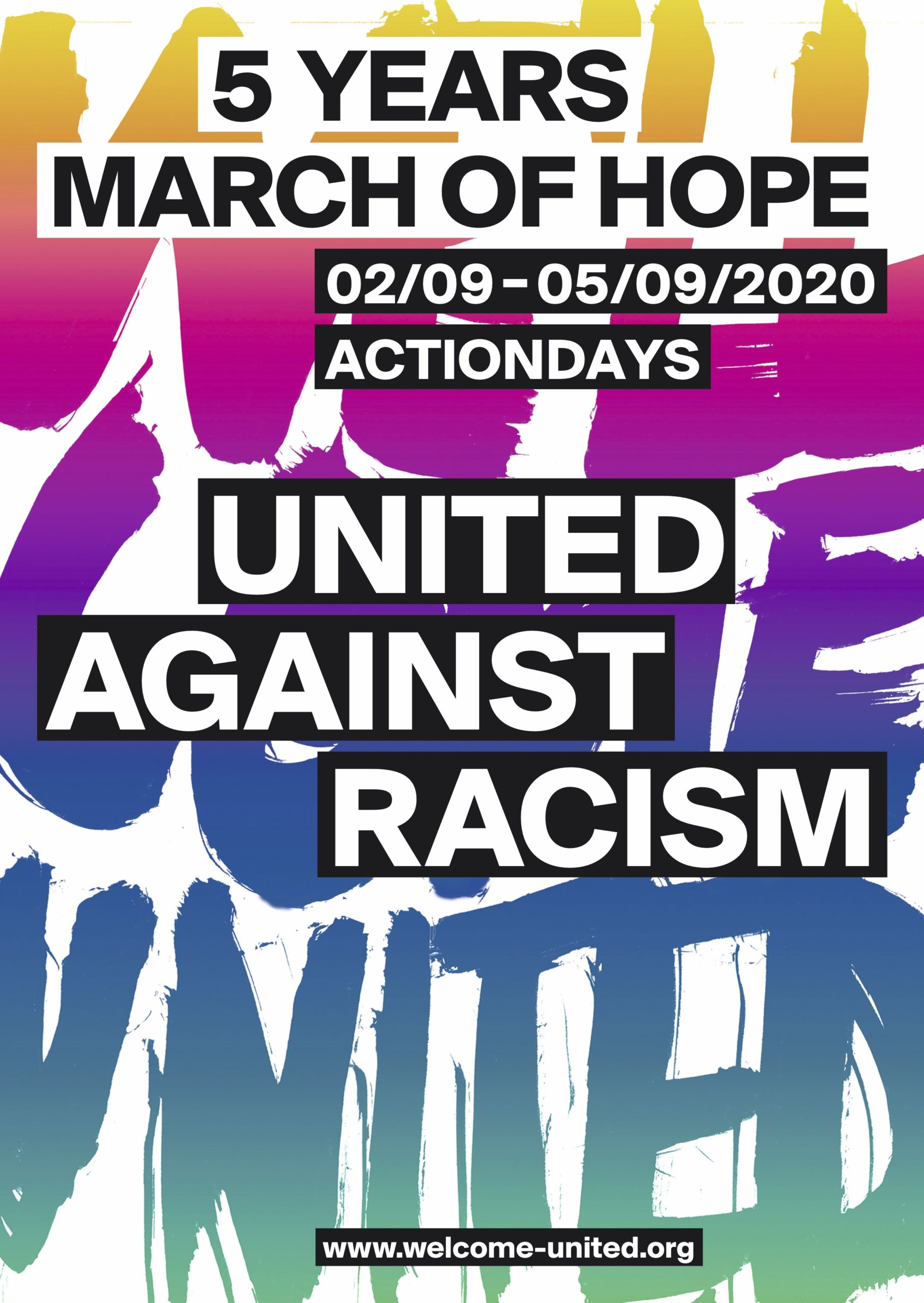 Racism kills: we will fight!

We’ll Come United calls and invites you to ‘Antiracism Days’

After the assassination of George Floyd by a police officer in Minneapolis, the Black Lives Matter movement took over the streets. They showed everyone that racism is a global system and that anti-racist struggles are the focal point of social change. In an impressive wave of global demonstrations, it became clear that there are countless connections between our struggles. We believe that we need new, broad coalitions for justice, for social and political rights. We need to go beyond particular movements and work transnationally to build a new common ground.

Even in times of Corona, we are here. We are still here, in Europe, in Germany and in Hanau. No terror, no BAMF and no immigration authorities can change that.We are still here and our daily struggles continue.

In spite of and because of the denial of rights to those who, even during Covid 19, are excluded from society by being forced to live in mass accommodations and camps, we are still here and our daily struggles continue.

In spite of and because of the incomprehensible violence and the murderous policy of deterrence at the external borders, at sea and also on land, where Brussels has now even legitimaised the shooting dead of people seeking protection, we are still here and our daily struggles continue.

In spite of and because of a deportation industry which continues to imprison innocent people and toa take them out of the country at all costs, we are still here and our daily struggles continue.

In spite of and because of a policy of divisiveness and agitation that incites racist murders and then trivialises them as the acts of individual perpetrators, we are still here and our daily struggles continue.

In Hanau, on 19 February this year, 9 people, our brothers and sisters, were murdered within minutes in a racist terrorist attack. Meanwhile the NSU files have been locked away for decades whilst racist networks and their connections to and within the police and the „Verfassungsschutz“ are tolerated.

Institutional racism determines our daily life: in offices and government bureaucracies, in the police, in the search for housing as well as  in paid work. Exclusion creates the conditions for the racist exploitation of people working in low-wage sectors and the underground economy. Racism hurts and kills on many different levels.

This is what our daily protest and resistance is against. We oppose this through the development and expansion of solidarity structures. Against this we organise ourselves with demonstrations, parades and campaigns. The social movements that clearly fight against all forms of racism are getting stronger. Our demands are getting louder: for a right to stay and papers for all, for freedom of movement and open borders, for equal rights for all.

In recent months, the slogan, #Leave no one behind has been taken up and spread everywhere. It  not only expresses the call for the evacuation of the inhumane transit camps on the Greek islands, but also the demand for closure of all such camps and an end to social exclusion.

We of We’ll Come United call for a broad alliance for justice and rights, bringing together the various actors from many different movements (climate movement, women’s rights, LGBTQ, antifa movement, antimilitarist movement). We are convinced that we all share a great struggle. Let us come together and plan actions together.

Despite the challenges of the pandemic, we want to show that we are continuing to fight on these different fronts for a society based on solidarity.  We call for decentralised anti-racist action days in early September.

September 2015, exactly five years ago, marked a historic breakthrough against the border regime. The March of Hope had demonstrated that it is possible to overcome borders. The Summer of Migration had shown that an open Europe is imaginable.

We want to remember and build on these experiences. That is why we are calling for a nationwide and transnational mobilisation around the fifth anniversary of the March of Hope in the first week of September. In joint days of action we want to express the glorious diversity of our struggles and networks. In a variety of activities, in virtual spaces, but also on the streets, and along escape and migration routes, we want to protest and demonstrate for freedom of movement and equal rights.

Leave no one behind represents not only the call for the evacuation of the inhumane transit camps on the Greek islands, but also demands the closure of all such camps and an end to social exclusion. Catastrophic conditions in the camps, be it on the Greek islands or elsewhere in Germany and Europe, make it clear once again, especially in times of Covid 19, whose lives are protected and who is left to die. We call for the closing of the camps and for decent housing. We demand Leave no one behind, no camps for any one!

#noborders – From the Sea to the Cities

The slogan combines the need for rescue operations in the Mediterranean with the demand for the reception of refugees and migrants in cities in which they wish to live. Those involved in sea rescue operations join together with mayors* and municipalities as well as with the “Seabridge” and “Solidarity Cities” initiative to create concrete corridors of solidarity.

#Noone is illegal – Stop Deportation and Dublin!

The resistance against deportations and the demand for a right to stay and papers for all are crucial daily struggles everywhere in Europe and beyond – whether as citizens*, inside asylum, as legal or political support or as a blockade of a deportation.

We intervene by building alternative structures, by strengthening the self-organisation of refugees in camps and communities, and by working with activist groups to create protective structures and safe spaces that serve our ultimate goal of preventing deportations.

In recent months migrantifa groups have formed in many places. These groups combine anti-fascism with the demands of migrant communities. The success of the Black Lives Matter movement has meant that the structural dimensions of racism are now being discussed by the general public. The experiences from Chemnitz, Halle and Hanau are connected with what we know from Minneapolis or Moria: Institutional racism is a system that shapes our everyday life: in offices and government bureaucracies, in the police, when looking for accommodation and at work. Exclusion creates the conditions for racist exploitation in low-wage sectors and the underground economy.

We demand the denazification of offices and authorities, of police and xxxyyy.

At the beginning of September we want to come together and plan actions together, in cities, villages and districts. Despite the challenges of the pandemic, we want to show that we continue to fight on these different fronts for a society of solidarity . There are many ideas: whether actions of civil disobedience, events about “Bürger*innenasyl”, a strike at the immigration authorities or a regional march from village to village, from camp to camp, for freedom of movement and the right to stay. Whether demonstrations and actions, visualisations, online activities or street theatre – let us fight together for freedom of movement, equal rights and against racism!

We would like to organise decentrally and gather at a regional level in order to realise We*ll Come United this year in parallel across several federal states or even regional associations and to make our diversity and strength visible.