as you all probably know already, the network of We`ll Come United has started a new mobilization for 2018.
Our common aiming point is the parade on the streets in Hamburg at 29th of September, which hopefully will be even bigger than last year.
The common call will be finalized in April, but we already started, what we call „swarming“. We visit cities, communities and camps, which have not been involved so much in We`ll Come United. We try to create an exchange in experiences on daily struggles against deportations and exclusion.
Finally we want to invite you and all, who are interested, to the „conference of the big coalition of antiracism“. It will take place from 10th to 13th of May in Goettingen and We`ll Come United is participating in the program. Find some more sentences below as well.
Latest at the end of April first materials like flyers and poster for We`ll Come United 2018 will be ready. Who already wants to order it or who wants to join the process of mobilization, pls contact us. Everybody is needed, lets get together! 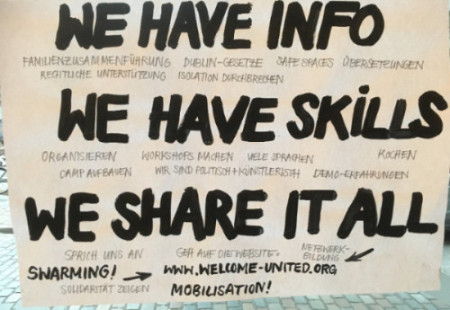 Lampedusa in Hamburg exists now for five years. Women in action and other initiatives organize themselves. It is a long history of struggles in Hamburg. Here lives the biggest afghan community all over Europe. Here more than 50% of all children have one single parent, whose family immigrated. Here thousands of people have to live in camps in stead of flats, and many resist. Together with Right to the city and Never mind the papers, with the Urban Citizenship Card, against deportations and equal rights for all. Here the summit of solidarity took place during the G20-meeting, and here is the space, the structure and the interest… and that are some reasons, why it was decided in a germanwide We`ll Come United-meeting in Kassel to do the parade in Hamburg! Now, in the middle of March, already more than 100 activists came together from various communities, groups and circles of friends to start the preparations. A big football club and several theaters want to support the mobilization, Hamburg is on the move! Who wants to join and who wants to get invited to the next meeting in Hamburg, pls contact us directly: hamburg@welcome-united.org 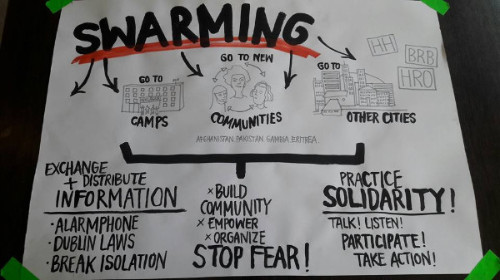 We’ll Come United on Tour: „Swarming“ and the circulation of daily struggles

While the date for the next parade was fixed but the first flyers have not been printed, the mobilizations already started. We swarmed out in first villages and cities in Brandenburg, Bavaria and Hessen. We`ll Come United should become a vivid process of mutual empowerment. In manifold discussions and exchange events, with exhibitions and flimclips on our daily struggles we want to contribute to spread our experiences of resistance – against deportations, for freedom of movement and equal social rights. Several mixed teams prepared materials about the respective struggles. Against the dublin deportations within Europe, on Bleibistan and citizen asylum against deportations to Afghanistan; materials about the new old deals of readmission agreements, recently with Pakistan and Ethiopia; and how to break the isolation in the camps and education for all.

The first efforts demonstrate: we have a lot to exchange and there are many experiences of resistance, particularly in smaller cities. Soon we will provide a pool of materials on the website of We`ll Come United, which can be used for all kind of events. Everybody, who is interested in the swarming-tour, who wants to organize an own event, a meeting or an action or who wants to order materials, pls contact us via: swarming@welcome-united.org 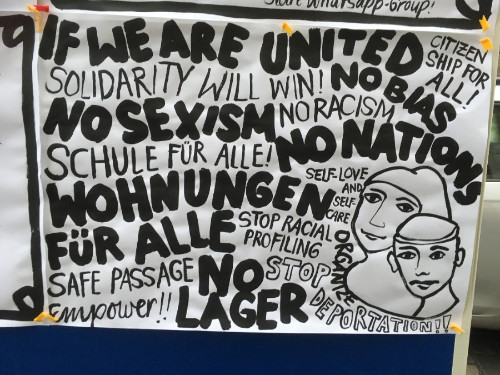 Big antiracist conference from 10th to 13th of May in Goettingen

„…The whole society is one contested space and the situation is open. Present struggles are taking place everywhere, and so will future struggles. …While the AfD – after the parliaments – wants to capture universities, unions and the media, we are confronted with the modernisation of the European border regime, which in Germany at least, is tied to the bondage of assimilation and exploitation. But that is only one aspect of our reality: Despite and against neoliberalism and the right-wing push, the power of migration is unbroken, the spirit of solidarity is vivid and the large- and small-sized engagement of countless people is still effective. No question, the times of course are not rosy. Something has to happen and we are all needed – also because many political actors dodge the old and new racism. Nevertheless: that what counts has already begun. We want to continue, in a better way and together with all those who are already part of it….“
These sentences are part of the first invitation for the Goettingen conference, which has been published together by the networks kritnet, Solidarity Cities, Round table on migration from Rosa-Luxemburg-foundation and We`ll Come United. A more detailed program will be online latest in the beginning of April, in manifold workshops and assemblies should be discussed: about ongoing campaigns and new projects, about experiences of selforganization and wider alliances with other actors, about daily practices and strategical challenges. Join the process!

If you want to join, have a question or want to tell us some news, write to mail@welcome-united.org

See you soon and keep on going!